Here we are at the end of the week and I am feeling fine :) How are you doing?
This past Saturday my boss, aka Jim Abney, fulfilled his mission of running for 24hrs to bring a spotlight on Childhood Cancer Awareness and I have to say he did a mighty fine job doing so!! I kept telling him “You are already doing more than I could” and I truly believe that, with the exception of a few ultra-runners around here, that statement stands true for most of us. Whether its Childhood Cancer Awareness or any cause you might feel strongly about, are you willing to put yourself through something like that to bring awareness to it?? Not many are.
Clarissa and I made it out to Memorial Park around 6am and put in 6miles, I was honored to run with Jim, by that that time he was in the full effects of pain but he was still going strong (and he kept it up till 5pm to make his 24 hr goal). The rain over night had made the perfect storm for blisters on his feet and that in turn was causing knee pain but he played it out like a boss and made it till the end with 75 miles!!
Here is a brief clip of what he posted after his run:
“In the Books: 24 hours and 75 miles later with multiple blisters, a banged up knee and emotionally and physically drained after completing the run to bring awareness to childhood cancer, but the picture below makes it all worth it. Just look at the smile on Sammy's face as he ran in with me to complete the run. But no matter how many blisters or sprains, it is nothing compared to what children ...such as Sammy and Finley go through as they are fighting their battle against cancer”

By the way because I work with Jim as his secretary I get to see the aftermath of his pain, and yes he  still has an ouch to his step this week but his pain is temporary and soon enough he will be back to his crazy ole’ self and running somewhere and doing something to fight for kids with cancer, as always I just consider myself lucky and honored to be able to cheer him on. {every now and then I get to catch a run}
For “Childhood Cancer Awareness” month I put together a quick T-Shirt to Tank-Top DIY – it turned out really cool :) I got the idea from Pinterest (of course) but I ended up following this youtube video – this is what it looked like in the end.  I will wear it again on the 27th for the B.I.G. Love Cancer Fun Run!! 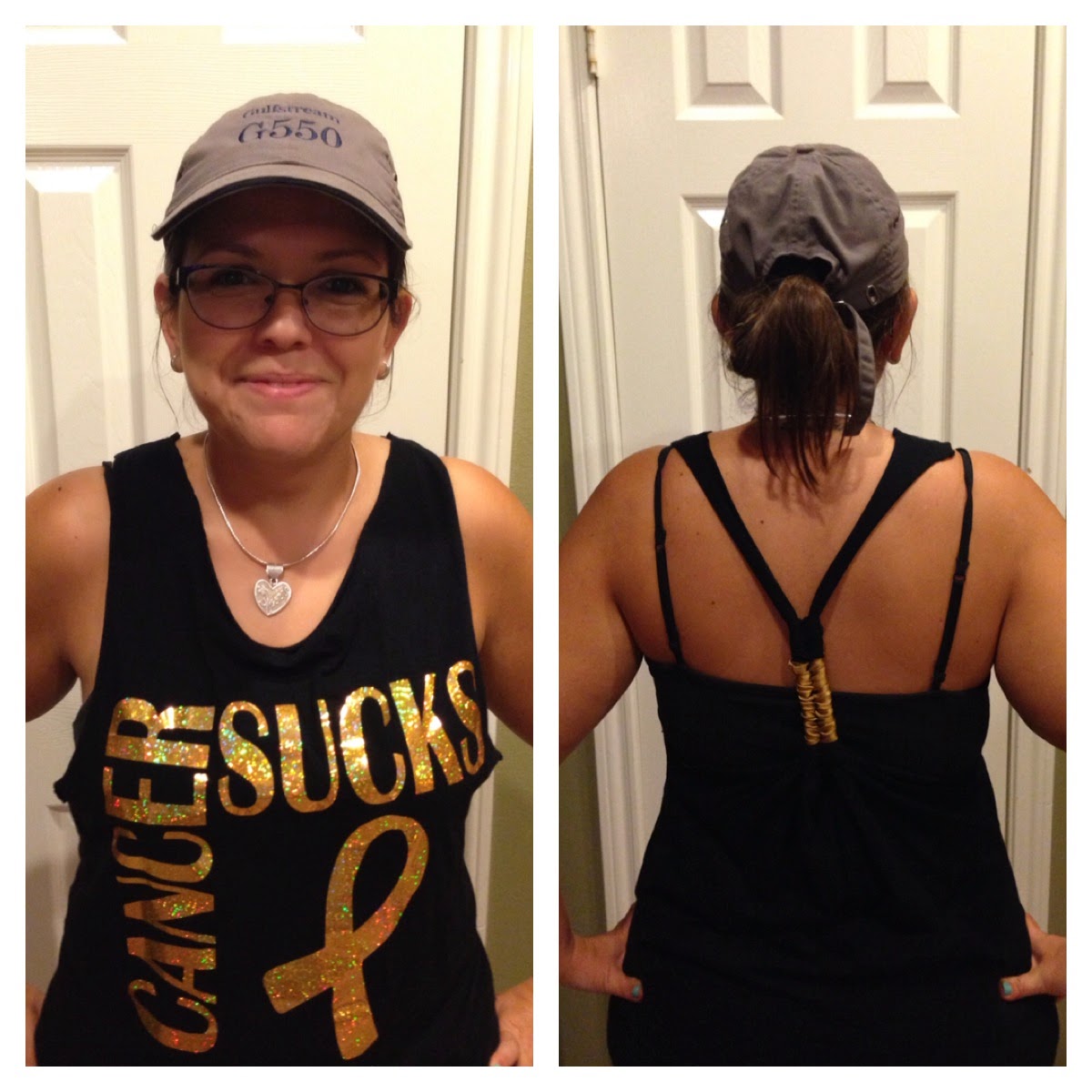 As for this weekend I will be running one of three bridge runs from "The Texas Bridge Series" – I know you're thinking I've lost my marbles now and after stepping up my training and the pain that has gone along with it I am starting to think the same thing!! This will be “The Toughest 10K Kemah" and I’m sure it will be a challenge because I do not think I’ve trained enough but I know that it will get done. By the time I get to the 2nd bridge "The Toughest 10K Galveston" run in October I will be just fine, all this leading up my second half marathon "La Porte Half Marathon" that rounds off the bridge series in November!!


Woo-hoo – I don’t know about y’all but its running season 'round here. I am one of the crazy ones that feel that change in the air and cool breeze and I stop what I’m doing and think… I should be running right now!

Posted by Running in Faith at 7:50 PM