This past weekend was Labor Day, for most it’s the last BIG weekend of summer although summer doesn’t really end until September 21st. Trust me once school gets started and schedules get crazy that’s pretty much it for us.  Occasionally we will make it out to the pool or the beach during Labor Day and even might make it a couple of times during September before they close the pool for good. This Labor Day weekend we had a camping trip planned; this trip was planned maybe 6 months ago. I’m sure my dad did this to make sure that we got the campsites reserved in time but OH MY! I don’t think that anyone thought about the 100+ degree weather back in February when we all said agreed that it would be fun and a great idea!


We went camping at Perdenales Falls, just outside Austin, TX and it turned out to be a really good trip – despite the heat. Alma and I planned to go hiking with no kids and me with no hubby just so we could get some good girl time in. Of course neither of us knows what a true hike is, after all we run. So when a hiking trail tells you it’s gonna take you an hour to hike a mile, it’s hard to wrap your head around it. 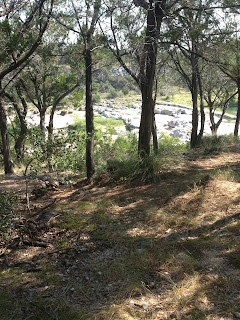 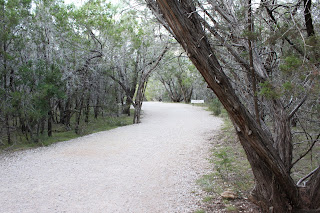 Sunday morning we decided to head out and find a trail before it got to hot. We decided to go to the “Perdenales Falls” a canyon craved out by the Perdenales River, because of the drought in that area the “falls” isn’t much more than a few trickles of water flowing over the rock yet it was still a beautiful site to take in. 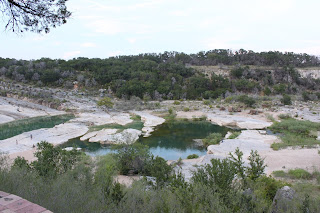 We took off on our hike and ended up at the base of the falls, where we found my uncle :) he was exploring too! So we joined him or he joined us and we had such a good time. As it turns out it was just what I needed. I can’t describe exactly what it was like - but I will try… We started by climbing and jumping across rocks to get from the bottom to the next layer of rock higher up. We sometime had to slide down rocks only to turn around a climb up the other side, this went on for about an hour and a half each time the drops got bigger and the climbs did too. I have to admit when we first set off to go for a “girls” hike this was not what I pictured. I had in my head that we would go for a nice long walk and talk about all the stuff we are dealing with at the moment. I thought we would be able to air out all out inner thoughts and frustrations, verbally to each other. Wrong. It was better than that. 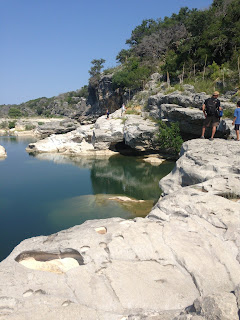 We were too busy taking everything in, we were too busy encouraging each other, and we were too busy trying to figure out our next step.  And no, it was not just girls, my uncle was there and it made things better. When we got to a spot we were unsure of he went ahead to make sure it was safe, he held back the brush when he thought we might run into it trying to climb up, he gave me a hand when I need a pull up a steep rock. He was there enjoying the hike along with us and it was comforting. Remind anyone of anything?


At the end we had to climb up a rock wall – I was standing there thinking #1 I couldn’t climb it AND #2 If I was going to, I sure was glad I am 30lbs lighter. I did climb it and if felt so easy, HA! These good ole’ running legs are pretty strong!


We got there Saturday afternoon and came home Monday evening – from Saturday afternoon on I was disconnected from my phone and the internet :::GASP::: by Monday once we were on the road back home I started to check my email and my Facebook and then I decided against it.  It felt good to be disconnected, I was able to reflect on myself and how far I’ve come. I realized how much I’m capable of and how much more I have yet to conquer. So I opted to leave those things for Tuesday and I’m glad I did :) So much more was done around the house and so much more relaxing took place afterward.
By the way… I think I might try rock climbing one day! Anyone want to join me?

Posted by Running in Faith at 5:00 PM