Aramco Houston Half  - Second Half

I’ve written and re-written this post now quite a few times… and am yet to capture my true experience somehow. Here is another rough draft that I hope makes it to the cutting board.

I will fill you in at another time and bored you with the details of what I wore and how everything worked and what didn’t. For now I will just tell you the cut and dry of how this race went down moment by moment. Really it’s only 13.1 miles so it shouldn’t take too long :)

Once we had gathered and gotten ourselves as ready as we could be, we headed out. At some point we decided to go out in corral "D" which was Cindy’s assigned corral, how could we not all start at least in the same corral?? For the past year any race done together was started together, this was no different.

Somehow, yet again, I managed to spot Jim in our corral! He was assigned to corral “C” but because of over crowding had been bumped to "D", of course when he is dressed in orange and is twice my height it’s not that hard to spot him –haha! But when you are talking about 25,000 people what were the odds? I found myself excited to get to see him before such a huge moment in my running lifetime, it would be non-existent if it would not have been for him encouraging me to start! So crossing that start along with the man who started all the craziness seemed quite fitting :)

The gun went off at 7am! Bang! We didn’t move. We didn't get to the start line until about 30 mins later!! There was lot of ~ we’re moving!! No we’re not… we’re moving!! Wait not yet. Okay now we’re moving!! And just like that folks we were off!!

Now I hadn’t really told anyone but I was certain I could run the race at a 12:30 pace but Cindy told me she wanted more of a 12:00 pace and I was wasn't sure I could do that, so I told Cindy we would start at a 12:30 pace and then see if we could pick it up. Within the first mile everything starts to sink in… so many people are out there with you, there are spectators cheering and things are getting a little real at this point. Soon enough team Snowdrop (Jim, his son and few others) passed us, Jim yelled out to us and we said our goodbyes! GOOD LUCK!!!! They had sooooo much farther to go than we did.

Mile 2 and 3 got us out of downtown Houston and into the Montrose outskirts, I used to work close to this area it felt really weird to be running the streets that I’ve driven through so many times! Through most of these first few miles I felt good, Cindy and I had fallen into a good system of staying right next to each other, we would weave in and out and find each other again.  Our pace was good between a 12:00-12:30 pace. Mile 4-5 were also pretty good, it was a nice part of the route and we run through W. Gray and Shepherd, again I felt like hey I used to buy our office supplies there!! And ooohhhh La Madeleine! Yum! Turning onto San Felipe was nice, people that lived there had come out to their lawns and were cheering us on, we had passed people in costumes, live DJ's, a couple of bands, and the best part was the signs! So many of them made me laugh out loud! It was nice. AND then we hit Kirby. Here our pace started to drag behind the 12:30 pacer. I could tell Cindy might be in pain (her back had gone out just a week before the race!) and I was worried she hadn’t fueled enough before the race.  Thankfully some Kind Bars were being passed out and I turned to tell Cindy to grab a bar, she was already making a beeline for them – good.

Mile 6-7 were tough, we lost the 12:30 pacer.  I was torn because part of me wanted to stay at our pace but the other part wanted to speed up and find the pacer again. At this point I didn't know where I was with my time, I wasn't sure I could finish at my 2:45 goal. At mile 7 I looked back and Cindy was slightly behind me, so I ran back a little and told her that we were officially more than half way there. We were now running down through a residential area in Rice, lots more people set up with more entertainment some even passing out their own snacks and water (how awesome!?) Just before we hit mile 8, the full marathoners split from our route, no way to find my pacer now, the pacers were for the full marathoners only.

Mile 8-9 here is where I lost Cindy :( I turned to tell her we were at mile 8 and I could not see her!! ah! I knew that around mile 9 my friend Patti would be there to cheer me on. I kept going and I kept looking for her, it was cool to cross over the Montrose bridge over Highway 59. This is a street that I drove down many, many, many times on my way home from work... very cool to be running through these streets. I was starting to worry that maybe Patti had left the side lines... we started 30 mins after the start and I had slowed down, so maybe she had left thinking she had missed me? Just about the time I felt like I wouldn't see her, I heard my name! Now a lot of people call your name when running because they read it off your bib, but I just knew it was her :) I had just passed her so I turned around and went back to give her a sweaty hug!

Mile 10-11 were the worst! I started off feeling great because of Patti, I felt like I was on top of the world! Woo-hoo!! and then I was alone!! It took me a while to figure this out, why did it feel so hard? I'd run for the past few months alone, but this race so far had been fun and I had someone to share it with all a long. I started to do what I've trained to do, I checked my breathing, kept tack of my pace and focused on my music -  a special thank you to Clarissa and Connie who sent me tons of music to fill my MP3 player for the run. I played my own game of guessing which song came from which friend- HA! I wasn't alone! I started trying to keep it closer to 12:00 minute pace. At mile 11 the only time we really had to deal with an incline - yay! Still I pushed through it - I may have picked up a quick cup of beer around mile 11 ;) I couldn't find water!

Mile 12-13.1 whoa! Around this time you are so close to downtown!! I check my time and something clicked, could I make it very close to my goal time. I started to pick it up a little. I started to pick it up a lot. It was very possible that I could make it!! The closer we got the more people started walking, I could not believe it, all this way there was no way I was going to stop now. I checked my watch again and there was only .5 miles to go - So I did. GO! GO! GO! I rounded that corner, spectators were cheering us on and then I spotted my family!! BOOM! It was done. done. done. YAY ME!! 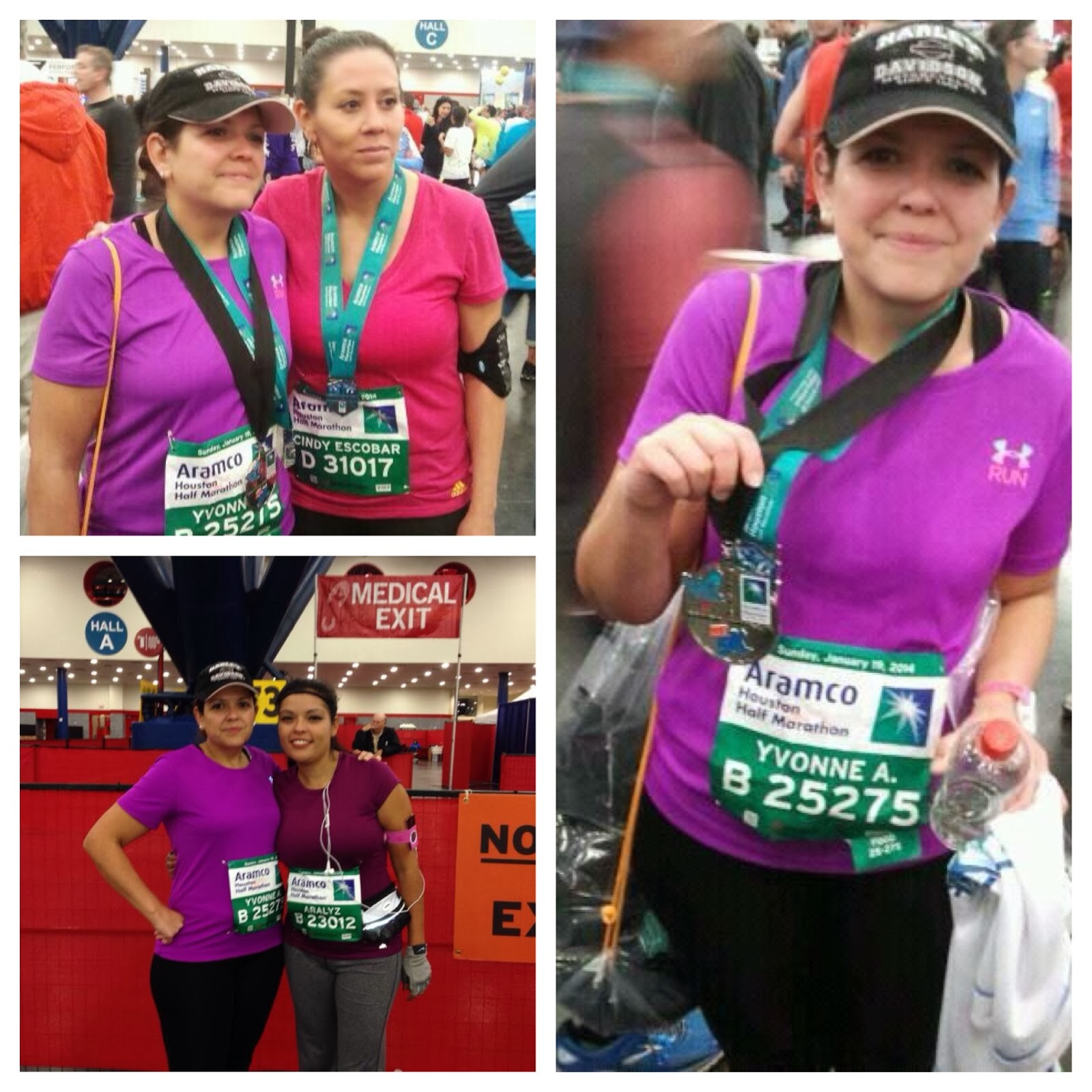 So many emotions when you cross that finish line. You get your medal and people are taking your picture you follow the others into the GRB, you get water. You're supposed to take pictures, get your Finisher Shirt and get snacks or breakfast, I went back to where the runners were coming in hoping to see Cindy. After a few minutes I started to think she had somehow gotten past me! I didn't have my phone so I hurried to get my checked bag and grabbed my phone and called Cindy. She answered, she was finished! YAY!! Pain or more pain she had kicked the finish lines butt! We took pictures, I got a double medal for doing both the 5K and the half and then we got our FINISHER shirts!! We went out to the reunion hall and met up with my family - it was awesome :) This race was such an experience, I would recommend it to anyone and everyone who loves hates loves running. I went for my first run on January 12, 2013 - I was hoping to do my first ever 5K and I ended up doing a 1/2 marathon a year later. Just like when I crossed that very first finish line after my first 5K and I thought I could totally do 13.1!!!! I crossed the finish line and thought I could totally do 13.1!!!

Thank you - for reading my blog for following my journey throughout the year. For telling me how proud you are of me and for cheering me on along the way, not just the 13.1 miles but every mile I've run all year round. At times when I felt I couldn't do it any more your encouraging words are what got me through it. Thank you.

Oh and yes, I think I just might take on the full marathon :) 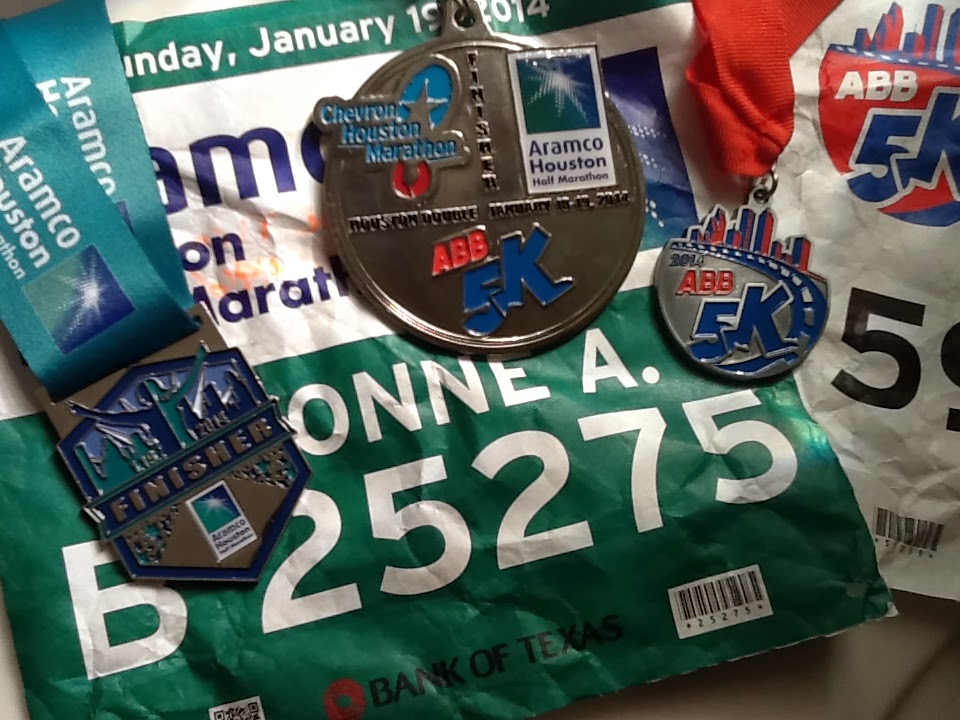 Posted by Running in Faith at 8:31 PM