As promised! A race day report for my first ever half marathon!! It’s official I can now slap a 13.1 sticker on my truck! Of course I sorta failed to get one BUT I will and I will do the slapping of said sticker at some point.  I can’t really wrap my head around it quite yet, so I hope that everything I share with you today can really express all of those crazy emotions that runs along side of you during a race like this one.
﻿﻿﻿﻿﻿﻿﻿﻿I’ll start by a quick recap of the days leading up to this weekend. It started with my little one coming down with the flu on Monday and as the great mother that I am, I just knew that I too would get the flu and that my run would totally be ruined for ever and ever! Thankfully that didn’t happen -phew! My little bear bounced back and made things very interesting and little hectic but thankfully she was back to normal by the end of the week. Wednesday I went out for my last non-race run, I did 3.5 miles and I felt really great :) My legs felt strong and full of energy! I think all of those runners who talk about tapering might know a thing or two about conserving race day energy after all!

Thursday night I snuck out with my girl-friend Connie for a GNO (girls night out) at the Houston’s First Baptist Church, at first I had been a little hesitant to go on such a crazy week, but in the end it was just what I needed. I was able to relax, laugh and talk without thinking OMG! I have a half marathon to run in 3 days!

By Friday I felt excited more than anything else, I picked up my race packets and went to the Chevron Houston Marathon Expo and I was in runners heaven! I picked up goodies along the way and I had the chance to do some shopping and I even had the opportunity to listen to a great speaker! Which I was hoping to get a chance to do all along. Truth is if you are an elite runner or an ultra runner or basically a runner who has been running longer than me - I’d like to pick your brain. Please and Thank you!

Speaker Robert Key, has run several half-marathons, marathons, Tri’s, Ironmans and completed an Ultra just a few weeks ago. I was sure there would be a lot to learn from listening to him!! He touched a few runners points, he reminded us newbies not to try anything crazy before the race - if you have trained all this time you should know what to eat the day before, the morning of and during your race. Don’t throw something crazy into the mix and risk the possibility that something might upset your stomach or slow you down. MORE importantly he spoke about the experience, “The Story” that you carry with you through out your run and not only your story but all of the ones that are lined up with you behind that start line. He gave me a new perspective of what to look out for during the race. He also made me realize that if and when I came out of this half, I knew I would be doing another one.

Saturday - ABB 5K - Yes I did indeed sign up for a 5K race the day before my ½! More than likely because I was crazy at the time :) The night before I slept like a baby, I didn’t feel nervous for the first time, running 3.1 miles didn’t seem like such a daunting idea, of course all my runs in the last couple of months have been 3.5 + miles. The plan was to run and take it easy and enjoy. Of course when I got in my car that morning there was ice on the windshield and it was cold.  Good thing I had everything needed to keep me nice and cozy! Of course cozy only last about a mile in and then you are burning up! I meet Alma at the start line and as in all my races so far, it’s been a huge blessing that I’m not out there alone! Running with Alma, Cindy, Jim, and my family all year long has been awesome, especially when you are there in the middle of hundreds and sometimes thousands! The 5K was fun, I started out slow but somewhere around the halfway point I just ran! I didn’t check my time or my pace :) As soon as I crossed the finish, which by the way is the same one you cross when you do the half or the full (eeek!) I found Alma! By the way (not getting side tracked at all!!) I found it quite interesting how all weekend I found my friends and family although there were thousands of people all around trying to find their friends and family!? SO, after that I got my first ever medal. Tee-hee! Some how out of all the races we’ve done none have awarded you a medal just for finishing. Alma and I got medals after the 10K Monster Mash but we had to go get ours IF there were any left overs from the ones who did the half-marathon - BOO!  Anyways here as soon as you finished someone placed the medal around your neck and said congratulations! Isn’t it funny how a year after I started running I got my first real medal? It was for a 5K that didn’t stress me out and that I never wondered if I was going to make it or what my time would be! I find that to be quite funny :) 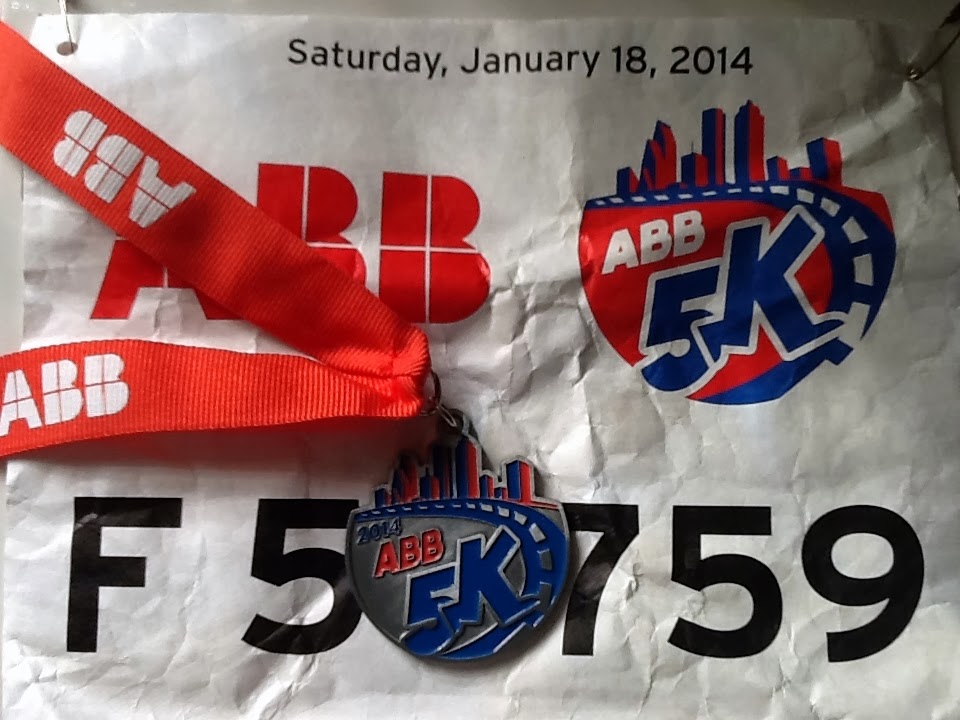 After the race, we meet up with Cindy who was there to pick up her packet for the half and my hubby and Hailey met me there so we could do some more looking around at the Expo and I had a chance to sit and listen to Kevin Kline speak too! Yay! He spoke to us about hiking Rim to Rim at the Grand Canyon! What a way to remind you that what we would be taking on the next morning would be no biggie, ha! Just kidding he didn’t make it seem that way at all but it was quite a story. Jose and I plan to one day hike the Grand Canyon, at least thats how we felt after hearing Kevin!!

Saturday night was the best way ever to end the day, I went to Saturday night service at our church. The message was good and I appreciated more than ever that we have Saturday night services, because this way I wouldn’t be missing it the next day. Pastor Tim gathered all runners that would be running the next day after service and he prayed for us! Again, he has run a couple of marathons and if I could pick his brain I would. Instead he offered some of his advice (without having to do any picking) , asked others what advice they would give, made us laugh, and asked us to have fun.
Roger that Pastor Tim!

Posted by Running in Faith at 8:52 AM