I have not written a blog in just about nearly forever. Number one I think it’s crazy that I even managed to remember my password! Number two – the reason I want to write again… it’s because I can run! Yep I can run – mind you slowly but I can.


After sitting down and analyzing why on earth I have a writing bug in me about this, I finally got to the why factor. It’s not because I’ve lost weight, no I’ve done that before. I can’t remember what is the biggest I’ve ever been – but if I had to guess I’d say it was 220lbs plus a little here or there. This was about 14 years ago, back then I was determined to lose weight! And I did. I went to the gym and busted my butt and lost a lot of weight. Since then it has been an ongoing yoyo, like so many other people out there. Up ten down five up twenty! Blah! What a pain. Needless to say; been there done that.


What is so different about this, well now I know I can lose weight. I know I can go to the gym for an hour a day and change my diet and TADA! I can lose weight.  I never knew or thought that I could RUN. I know that sounds funny but it’s true. About two years ago I started going to the gym in one of my “I am going to lose weight” type mind sets. I did go and although I was terrified to try Zumba I did that too. I even went to weight lifting classes. Neither of these made me feel like they were things that I could not accomplish. I’ve done some booty shaking in my time so all though I was intimidated by Zumba I still had a feeling like it was something I could do. I loved it. Running – that is different, since I was in Middle School I hated running I avoided it at all cost and made sure that I did as little as humanly possible.  You know on the track in school – I run the curves and walk the straight away! Yeah that was a big IF I even made it to gym class that day!


Getting started- Life takes over sometimes, one busy day turns into a very busy week, turns into a busy month, turns into busy life.  You’re going to think I’m crazy but after I came back to work the thought of taking out an hour and a half or so to hit the gym a few time a week seamed unreal.  I mean how is that possible?! So the weight came back, very sneaky like… BOOM HI I’M BACK! I was in denial.  Then something happened last September that turned things around, my boss attempted to run a 5K and was not very happy with the outcome. Over the next few months he started training and his drive and determination began to wear on me. He went to a trip to Vegas and got every run in during that time – throughout Christmas he kept things in control while I chomped on all kinds of things that were NO BUENO! Ok they were really really yummy but not so good for my waist line. By January my mind was made up, I would give it a go. See what would happen... 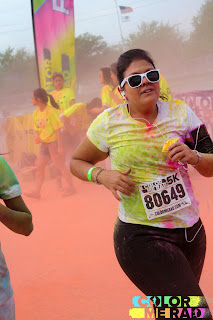 I could write more and more about my whole journey but I won’t bore with that for now :)My next post will contain embarrassing details like time and stuff!
Posted by Running in Faith at 10:28 AM

Email ThisBlogThis!Share to TwitterShare to FacebookShare to Pinterest
Labels: Running