Recap and then some...

Here is a recap from last week’s runs, this past week was by far much easier and I think I have slowly improved my time some. I promised I would weigh in and I did …

There wasn’t a change in my weight really, about 1.6 pounds, but on the flip side of that even though the scale did not move much I can tell that there were changes. I was able to get into a pair of jeans I hadn’t been able to squeeze into in almost 7 years! I promise I tried to put them on a month ago and it was a negative! Therefor I was totally excited, later over the weekend I decided that maybe another pair I had stashed away might fit too – they did make it past the hips and I could button them! HA! They were still a little tight for comfort but I was still impressed. I apologized to my scale and made friends with it again after all the foul things I called before. It goes to show you that it is not all about the scale all the time.


On another note, when I run during the week I normally go right before I pick up Hailey from daycare and on my cool down I pick flowers for her. It’s pretty cool because it makes her day!  She always (always) ask me where I got them from, I tell her I pick them at the track where I run, and she is always asking to see the track. This Friday I decided that I would take her for a walk there, she loved it and she picked and picked flowers for her daddy.  We had to take two rest stops and a couple of fairy tales to get all the way around but we made it!! I was so sure I would have a mellow little monkey after that and I sooo thought my evening would be nice and relaxing – wrong! It just fueled that crazy girl of mine she was so full of energy the rest of the night!! I guess exercise does increase your energy?! 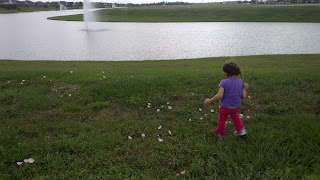 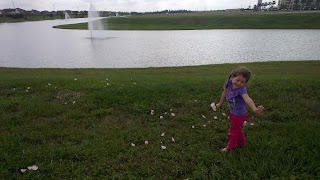 This week I have a 5K on Wednesday and I’m really looking forward to it. I can’t wait to get an official time on my run and see how much I have improved my PR time. I’m also excited about this run because it is for a good cause, the funds go to the Snowdrop Foundation. Honestly when I first started this I thought I could be going to a gym and pay them $25 dollars or more a month or I can try this running thing and I can sign up for a 5K a month and that money can go to help out an organization that supports a great cause.  This one in particular holds a special place in the heart of my boss and seeing him so involved has only led me to feel very blessed to be a part of something so awesome! Therefor I will promise to post something right after the race to keep you posted! Hehe can’t wait!!
Posted by Running in Faith at 7:29 PM