Last night was the Chelsey’s 5K in Santa Fe at the High School, just a little ways down from Alvin, the whole way there the only thing I could think about was how HOT is was! Yup only in Houston would we have 85 degree weather one evening and 69 degrees the next – all in the month of May! Once we got there it didn’t feel so bad and we meet up with some of my co-works and sort of felt at ease about the whole thing. The turn out for this 5K was completely different than Color Me Rad, here we had about 200ppl vs. the ummmm 5000ppl at Reliant. This made me worry a little too because I had then sudden thought “What if I come in last!” of course I knew I wouldn’t really be last because this is a run/walk 5K and lots of people were going to be walking it, again I talked my self into not freaking out.

As the time ticked on and our 6:30 start time came closer we went out to the track and took some pictures as a team. For this run I signed up as part of team and was feeling really blessed to be apart of something that had a real meaning to it. Ever since I started running I knew that I wanted to get a chance to run as a part of “Sammy’s Supporters”. I have heard about Sammy for almost a year now and his battle with leukemia, my boss has a special place in his heart for Sammy and has been helping with other runs and events to help raise money for Sammy and his family or for the Snowdrop Foundation. It was really awesome to see Sammy and to see him out and about, the last time I knew there was an event for him he was under going treatment and was too weak to get out and enjoy it. It was a comforting feeling seeing him being out and him smiling and enjoying the evening. Here are a few pictures of our team and my boss (silly tutu and all) with Sammy! 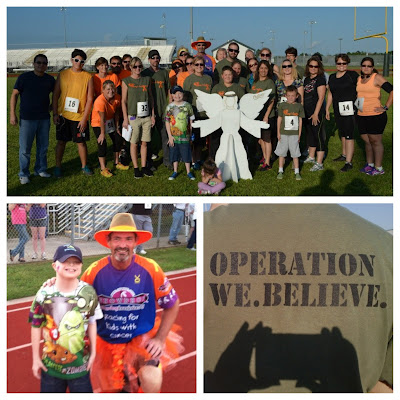 After the pictures we all got ready behind the start line and heard a few words about Chelsey, a young lady that lost her battle with cancer. Chelsey always wanted to do something to raise money for the fight against childhood cancer; they told a story about when she asked her parents what were they going to do? The idea for Chelsey’s 5k was born and this year was the 6th annual 5K in honor of Chelsey. Suddenly the out come of my race, my run and my time didn’t really matter so much any more. No matter what happen next this was already worth it.

The bell rang and off we went, I have to admit I felt like I was slower than slow! Even when I checked my time and I was at an 11min pace! I felt embarrassed to run even slower, already I felt like most of the runners had passed me up, but I knew that if I didn’t slow down some I would wear my self out before mile 3. So reluctantly I slowed down some and just kept telling my self – slow and steady – slow and steady. I was really dreading being straight in the sun but thankfully there was plenty of shade once we were running into the neighboring streets. I have to admit to you, that my initial pacer was a woman pushing a stroller – yes a stroller! The whole time I kept thinking to myself there was no way I was letting her out of my sight, so I kept pushing forward. Eventually our half way point came up and I was feeling pretty good so I felt that I had reached that comfort zone and I was good to go. Close to the end of mile 2, stroller and mom were right in front of me and I felt like I was slowing down just to I could keep her in my sight, so I thought to my self – Hello all this time I’ve been trying to catch up to her and I now had the chance to pass her up! Duh! So finally I passed her, and around that time I felt like I was done…like I was exhausted and it was time to throw in the towel! Waaahaat! I can run three miles, so I set my eyes on a guy in front of me and decided I was going to catch up to him. I figured if I focused on something else I could make it for sure. Slowly I caught up and passed him too! By this time the end was around the corner so it was time to push through whatever was tiring me out and before I could think about it anymore the finish was there and this 5K was over my friends! For whatever reason this one felt SO hard I don’t know why and at this point you are only glad that it’s over!!

Posted by Running in Faith at 6:52 PM