I have not updated my run times for quite some time so it is very much updated here. If you do take a look at it – there is some filling in that I have to do. So we will start with May 8th – the treadmill.  I will go ahead and tell you now that I’m not sure me and the treadmill are friends.  When I first got it I was super excited, a friend of mine noted how much I was hating on the heat for my run at the Chelsey’s 5K, he then told me he had a treadmill if I was interested in it for hot days (every day from now until Mid-October will more than likely be a hot day) and I said yes! Turns out the only thing I hate more than running in Houston heat is running on the treadmill. HA! 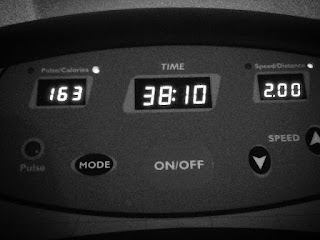 I don’t have a Garmin foot Pod thingy to sink to my watch when I run, so I just went by the numbers on the machine AND according to it, it slowed my time way down! It took my forever to get to three miles and I wanted to kill the treadmill afterward AND even though I was inside with the fan on I was drenched – someone might as well have dumped a bucket of water on me.  I know some of you are thinking – good, sweat is good! BUT it is different than sweating outside.  Having the air flow around you when you are running sort of dries you off as you go and yes there is that feeling of being out in the open and just being free to go anywhere you want.


The turn out was pretty good, first of all he helps me by pushing me to go a little bit faster. Second, Jose had been struggling to run 3miles, he had managed to run 2 1/2 miles but had hit that brick wall when it came to pushing him self further. With me of course he slowed him self down a little bit and by our second run we hit our 5k distance. I remember making it to driveway and I turned and told him "There! 3.1 miles - you did it!!" Funny thing when you first run those daunting 3miles, it opens a door you didn't think could be open... It opens the door to running 4miles :)

Speaking about 4miles, last Sunday I was supposed to run 4miles. I set out on my course around my neighborhood and about half way through I got a funky pain in my side :( and no matter how much I slowed down it just did not work out. I was so bummed out in my third mile I had to throw in the towel and I walked the rest of the way home. I was so upset about my run and disappointed, I really had to talk my self into understanding that, bad runs happen...they just do. Plus I have to be thankful that there is always next weekend :)

This week I was invited to join my friend Cindy to join her for a run on Wednesday at the Sugar Land Memorial Park. I was excited to join her, I had been looking for a way to get out to that park and run its track. There was a 5k there this Saturday but I couldn't join this one, so I took Wednesday as my chance to get out there. We met up and it was pretty awesome! I really liked the park it was nice gravel trail and it has wet lands all around - and it had lots of other runners on the trail, that's one one thing I miss because running in the neighborhood there is rarely other runners out there. It has a pretty cool play ground too, we went as family and Jose and Hailey hung out and played while we ran.

While I missed the 5k today I got up nice and early, with the plan to run my 4miles, once I got out there I decided that I would try and up it to 4.25 because according to my plan that's where I should be and I told my self that even though I didn't have a good run last weekend I wouldn't let it set me back. So I was determined to see if I could make it happen, once I got to 4miles I knew I could push my self the extra quarter and once I reached that point I ran it till the end of the street that I was on at the time, rounding it off at 4.3 miles. I was happy with that!! I am having trouble with getting faster but I'm okay with that for now. I'm making it my goal to push harder this coming week. After all there is that little voice telling me I can do it :)

Things learned - running on the treadmill vs running outside waaaayyy different. Running on gravel vs pavement way different too but I can see how it helps you build stamina. It's getting some serious kind of hot out there and the humidity makes it thick! Also here is a heads up, the mosquitos are making a come back AND keep your eyes peeled because I've come across a couple of snakes too!

Here is my weigh in pick for this week - and me and Mr. Treadmill are trying to make nice, I'm walking on it whenever I have a chance, so far things are going ok :)

Posted by Running in Faith at 7:42 PM