Monday was my toning day and I thought about what I wanted to do exactly, I thought of all the exercises I’ve ever done over years. I thought about the ones that I felt the most. I thought about the classes I’ve taken and videos I’ve tried out and eventually I picked out a few for each area I wanted to work on. Some for my abs, some for my legs and some for my arms, I came up with a pretty good set of exercises, I am in the process of finding all the correct names for them and then I will give you a list. The one thing I chose to be a part of my workout was the oh-so-fear-full PLANK! I admit many a times at the gym or on the video the instructor asked told you to get in to plank position and I cheated I would set up on my knees, never really trying the PLANK. I knew it was a challenge for me, so I threw it into my workout and hoped it would not be that bad. Day one I could barely hold plank position for 15 seconds tops, day two – I could not sneeze with having to cry a little bit. Day three (my second toning day) I could hold it for a little bit longer not so much pain – YAY! Sunday night was day three and again much better :)


Running went well, although my Saturday long run was a tough one, I wanted so badly to reach my 5miles goal but after mile 4 I was exhausted!! I ended up doing .8 of my fifth mile and I had to run/walk it. Next Saturday will have to be it no excuses! Ha!

I also tried running the track at the local school and do a training run (fartlek’s funny name but a real term Swedish for “speed play”) either way I do this in my own way and it has worked for me helping me speed up my time a little bit. Lately adding speed to my time has become hard. Harder. Is it ever easy? I don’t know, running is a very mental thing, it really is mind over physical ability. I find myself having a constant battle with how my body feels vs my brain telling me to keep going.  I am hoping speed is just a mental block, which I have to just get past this wall and keep going but IT IS HARD! I feel like I’m going all out and then when I look at my time and I’m like really??? Dang I could have sworn I was going faster. I know speed isn’t what it’s all about and some days I really wish I could make myself stop worrying so much about it and just run. Less thinking more running… I think I’ll adopt this way of thinking form now on but I’ll still keep my Garmin with me just in case ;)

Oh yes! I almost forgot I did weigh in this past Friday!! Mr. Scale decided to move…a little bit…like a pound. SO I am boycotting Mr. Scale my not featuring him on my blog this week. I know you are bummed… but in lieu of that I put together and even more embarrassing picture!! This way you won’t feel cheated :) A quick sneak peek of what running looks like for me! Mr. Scale is allowed to return in two weeks only is he is kind enough to show me numbers I like better…. Of course I will have to do some serious behaving myself if we are to get along. Wish me luck!! 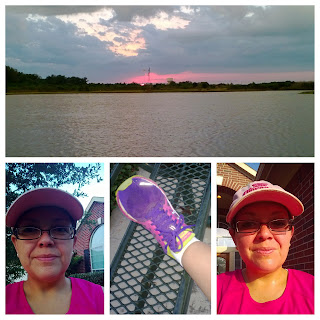 Posted by Running in Faith at 3:51 PM