Getting to know Kayleen McCabe 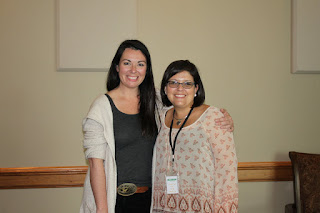 Another adventure and another amazing experience. This past weekend I had the awesome opportunity to head out to Lake Conroe for the Home and Garden Show and interview Kalyeen McCabe host of DIY Network’s RescueRenovation. I was excited and nervous and maybe even a little giddy, partly because I’d never really done an interview (shhhhhh don’t tell anyone) and mostly because it has a lot to do with the direction I am trying out lately.  How many of you watch DIY shows and feel like you could really do that? I know I do, constantly.

I’ve been ready to start working on bigger and more serious DIY projects, maybe redo some furniture - maybe even make some furniture - who knows the sky is the limit right? So having the opportunity to pick the brains of an awesome female DIY’er, Contractor and Show Host was like there was a little light shining on a wonderful opportunity I couldn’t pass up.

When the time came to sit down with Kayleen and Kay from The More theMerrier, it was like the nerves were set aside and we sat back a talked like a bunch of old friends that love power tools and share a craving to make things. We talked about how naturally it is that we can look at something and think “I can make that” or “I can make that better”.  We talked about the smell of saw dust and how really empowering it is to say “I made that”.

Eventually we had to get down to real questions and answers, if not I am pretty sure we could have spent the day just chatting :)

Q1: How does it feel to be a woman contractor? Does being a woman make it harder?
A1: Actually no, most times when she walks up to a job site, from the moment they open the door she has already broken down stereo types just by being a woman! They already feel comfortable with her. Women are just better at being a contractor, we have a great sense of detail. When two guys are bumping heads a woman can just walk up and be like come on – let’s figure this out!
“As a woman contractor I get to have a big tool collection & I have a big shoe collection too!”

Q2: What is your favorite renovation?
A2: There was one renovation that was just bad, the weather was horrible it had been raining the whole time, they were building a pergola into a sloping hill. Everyone kept telling her she couldn’t complete this project, there was just no way it would work.  Then when it was time to lift the top to the pergola – it was like the skies parted and there was just silence and as the crane lifted the top it was perfect.

Q3: Worst renovation?
A3: While putting insulation down in an A frame house Kayleen lifted her left to get over a beam and just as she was making her way over her overalls were caught and she found herself stuck, in an awkward position for about three hours!! It gave her plenty of time to think things over "It this really the line of work I want to do?" or "I wonder if someone will find me here years later mummified just like this". She finally wiggled her way out of her overalls only to realize that she still had turn around and make her way back out. :)

Q4: I couldn't help myself, I had to ask her about the time she ran a marathon :)
A4: She was offered the chance to run a marathon by a sponsor, she agreed to do it (with no training) she figured after being on her feet working on a job site for 18 hrs she surely could run for 6hrs!! AND she did, not too sure about doing it again though :)

In the end, I was drawn by Kayleen's insight to her current mission, teaching youth about learning a "Trade" and the fact that college is not your only option. She wishes someone would have told her she had another option when she was younger. "No one ever told me I could be a contractor"

Her message to adults? Respect the trades, it takes 27 trades to be able to build a house. DIY shows will give you the illusion that you can do-it-all-yourself truth is sometimes you need to hire the right person for the job. Coming from a family of trades men – I understand where she is coming from.

If you want to be inspired you can watch a little bit of Kayleen’s story here.

"It's all art actually just, do you hang it on the wall or did you build the wall you’re hanging it on"

Posted by Running in Faith at 8:47 PM