What day is it?

How many of us still feel slightly off on our days. I look at the date several times a day and still second guess it. Sometime last week I remember saying that it felt like one day it was August 24th and all of a sudden its mid-September. Many people have asked if we received any damage in our home. Thankfully we did not flood. The only water damage we did get was in the form of a couple of leaks around the house – which still exist at this time. We’ll get to them at some point, in the meantime please do not rain sideways with wind at 50mph. Thanks.

This statement might sound more accurate for most of us. If you were not directly flooded by Harvey you know someone that was. There is no 6 degrees of separation –it’s more like 1 degree. There is also the knowledge that Hurricane Harvey was the “sprint” and the recovery process is the “marathon”.

This was the worst day for our little family, we were an island and Monday woke up relentless. It rained all day never allowing for the water to recede, like it had in the days before. Our neighbors and I started to come up with a game plan in the event that we might need to evacuate. I braced myself for a long night. I went to take a shower that night and as I stood there I realized that we were going to be okay. I was in my home, which hadn’t lost power, internet or even cable at this point. I was in my bathroom, with hot water and no time limit. I would be going to sleep in my bed. At this time I knew family and friends that were not so lucky. Evacuations, shelters, hotels and flooded out vehicles. WE were okay.

Sitting at home was such a hopeless feeling.  This is when I started making my way to my craft room and designing my #TexasStrong Decal. I took an inventory and figured I could make them and start raising money for something (Hurricane Harvey Relief) I am no JJ Watt but it was something. The orders poured in and I was floored. I ordered more material and would stay up late at night putting things together.

Thank you to everyone who placed orders. I reached out to my home church to find out the best way to help. At this point we had $600.00 in orders. They asked us to help a couple in their 70’s who while gutting their house, looters came by a stole their fridge. (wait what? Who does that? Looters, looters do that.) When it came time to buy the fridge we had a choice to buy a tiny one that would need to be replaced or get them a full-sized one. We went to the full-sized hoping that all the orders would be fulfilled and paid for. A few days later we had $600.00 in paid orders.

More orders kept coming in, it sort of blew my mind. People would share and share my Facebook post and more orders would come in. How do you determine someone’s needs over another’s? Everywhere we look there is need. I just kept praying that somehow I would just know what to do and how to do it. Social media and the news starting bringing awareness to an area not far from me. People in this area had not received any type of relief, thanks to the continued donations I teamed up with someone who was taking supplies to them. We bought water, rice and toilet paper and sent it with her. I remember worrying because I knew they had more needs, they needed tooth paste, personal hygiene products and baby formula. That very day I sat down to talk to someone and she mentioned how her church had an overflow of supplies WHAT? I asked if they had toothpaste – tons of toothpaste! Tons of water, lots of personal hygiene supplies and formula too. YAY! By the end of the week so many people were focused in that area and help was coming. 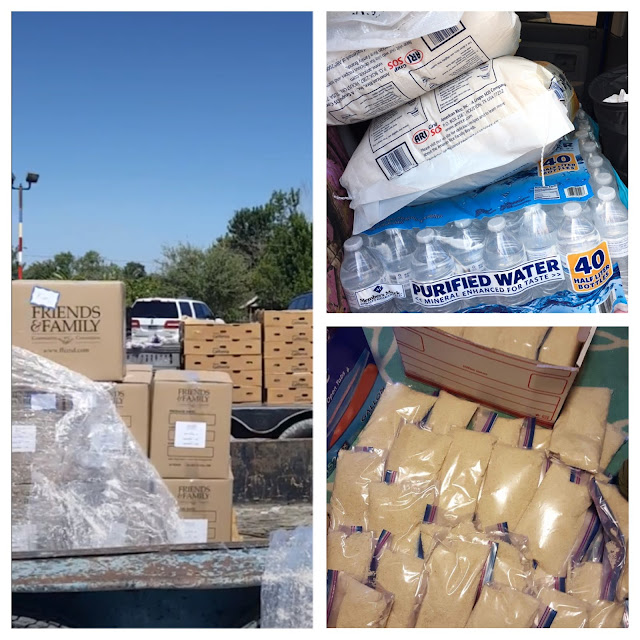 There isn’t a way to measure the loss everyone has been through and currently still going through. I decided to make my decals #TexasStrong because the devastation was wide spread so many in Texas were displaced. Everywhere you looked you saw the same thing. The strength and unity of everyone, race did not matter, age did not matter, and denomination did not matter. The real Texans shined through, the weak were made strong according the strength of the ones surrounding them.

Posted by Running in Faith at 8:10 AM